It's been a while...life has rather got in the way of keeping up with this blog. It's not been for lack of what my friends would call fodder. It's been a matter of time and headspace. My aim with this blog is not to use it as a space to vent - which would be all too easy. Rather to offer a considered view of parenting and family stuff as things pop up that trigger a response in me. And that takes care, which takes time, which I've not had a lot to spare for the last little while. However...something dear to my heart popped up in The Sydney Morning Herald today. 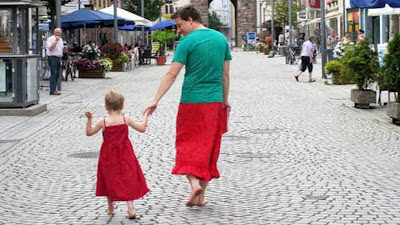 This is a photograph of German father, Nils Pickert, with his five year old son, which appeared in an article in today's Herald, which you can read here. Pickert's son is at an age where small boys quite often wish they could wear dresses - both of mine did around the same age (one more definitely than the other), as did the child of a friend of my mother's, and I daresay more within my circle of friends if I asked around. In doing so, Pickert's son became the brunt of a considerable amount of bullying and teasing and, rather than taking what could have been many different options, Pickert chose to don a skirt in solidarity with his child. The writer of the article, Christopher Scanlon, says Pickert should be voted 'Father of the Year — no, scratch that — Father of the Decade' for opting to stand by his son's choice, rather than try to impose a more general stereotype.

The media and Internet furor has, apparently, been considerable, with Pickert being accused of poor parenting, at least, to downright abuse. However, as the mother of two boys, I and they survived these phases. One of them, at four, bemoaned the fact - on viewing an extremely frothy theatre costume I'd brought home to re-furbish - that he didn't get to wear anything 'pretty' like that, and why couldn't he have dresses too? The other, at five, refused to have his hair cut and by nine sported a waist length mane of the most spectacular streaky, dirty blond hair. He also had amongst his toys a small baby doll that he'd begged for at two, which he cared for most diligently for long stretches of time - demanding that I sew new outfits for so she wouldn't be cold - and then neglected for equally long periods of time when other things took over. At eight, when all the children in his class were taking favourite toys to school for show and tell, 'baby' was in a period of being cared for and he insisted, despite my concerns about him being teased, on taking the doll to school complete with a small case of her entire wardrobe.

The one who wanted the dress had me chewing on an almighty dilemma. On the one hand, I didn't see anything at all unreasonable in his desire for something pretty. However, I knew his father would have very different views and wouldn't be above some pretty negative and unedited comments which I was concerned could be more damaging in the long run. So, some creative compromise was called for... I had just finished making myself a dress from some wonderful vintage, printed linen - cream background with an abstract, but clearly floral, splashy print. I pulled the scraps out and asked if he like it..the glowing eyes said it all, so I made him some shorts. He wore them until they threatened to split even when he was standing still. Then they were handed on to a friend's daughter. they came back and were worn by Son No. 2, then my goddaughter, and are currently in my sewing box awaiting new elastic to go onto small niece who will be just about big enough for them this Christmas.

No. 2 son loved those shorts. He didn't ask for dresses, but he also loved pretty things and beautiful fabrics - he still does. His hair was forcibly cut by his father just before his tenth birthday, and he's never been quite the same since. He's twenty one now and talking about growing it long again.

The thing is, these are all external expressions - some of which may pass, some of which may be a bigger and deeper statement about core identity. Personally, watching No. 2 son battling through the trials and tribulations of a gifted child in an education system that couldn't cater to him, I felt enormously proud about the self control he exercised in the face of the inevitable teasing he faced from other kids and some teachers about his hair. I just wished he could do the same thing about some of the other issues - but nothing's perfect, right?!

But, back to the skirts and dresses. Ultimately, this is a cultural thing, and in the West, we've become so homogenised that we've lost sight of the fact that the way we may apportion gender characteristics and style is something that has evolved over time, and has been driven by a great many different factors at different times - and it's not fixed. A lot of it is driven by the fashion industry, and then there are cultural stereotypes that, as much as we might wish it otherwise, can have all of us condemning or celebrating particular decisions without thinking overmuch WHY we do that. A perfect example of this is the constant negativity around Shiloh Jolie-Pitt - daughter of Brad Pitt and Angelina Jolie. This child, from a very early age, has been dressing mostly in boy-style clothing - and the media backlash has been damning at times...

I say...and this is a purely personal opinion...who the hell cares what people wear, as long as they're comfortable in themselves? And on the men with dresses thing...one of the most common negative comments is that it's 'gay' and that allowing boys to 'indulge' in wearing dresses when they're little will 'turn' them gay... I copped this over No. 2 son with his long hair and 'baby' in arms - because when that child was high on his list of priorities, where he went, so did the 'baby'!

Is it about masculinity, and is it that subverting a stereotype is deeply unsettling for many in the general population - and why is that? Have a look at this pic: 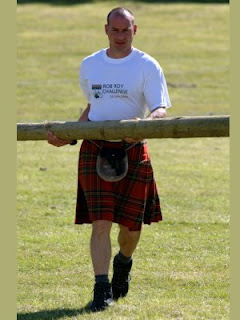 I don't know about anyone else, but I can't see anything here other than some pretty solid masulinity. Part of that, I have to say - and this was borne out when we went to the Highland Festival in the Souther Highlands this year and were surrounded by men in kilts - is that a man wearing a kilt with confidence is a darned sight more masculine to my way of thinking than a guy slouching along in drainpipe jeans that are hanging so low down I can see nearly all of his underwear... And this one: 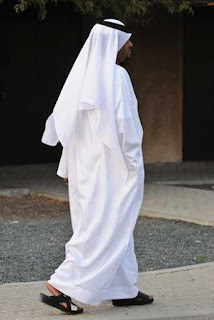 Whatever your views on Arab culture and politics, I think it's reasonable to assume that most people are going to view the traditional Arab man as an inherently masculine creature - regardless of his long skirts.

Coming back to the issue of sexuality - because this whole discussion inevitably comes around to it - I don't think that a gay man is necessarily any less masculine than a straight man. Or a gay woman, come to that, is more butch than a straight woman. That's character stuff, and the whole spectrum of character traits can be found across genders and sexuality types. That may be a bit of preaching to the choir - but I felt it should be said.

While I was chugging around the net preparing to write this post, I came across another article; this one about a British boy who borrowed a school uniform skirt from his sister to protest the lack of a comfortable summer option for the boys at the school. He cleverly exploited a loophole that stated - without gender specification - that tailored black trousers or a skirt with no splits could be worn in summer...but no shorts options for the boys. With the support of his family and many of his mates at school this feisty twelve year old wore his skirt to school to make the point that the boys were equally entitled to have a cooler summer uniform option. You can check out the article here.

Who knows what will happen with fashion - there are couturiers who are sending men down the catwalks in skirts. Vivienne Westwood certainly started it some time ago, and many of the other houses have followed suit at some time or another. Will it take off? In a culture like Australia, I suspect not. My father used to have a go at a friend of the family every summer - it was so regular that it became exceedingly tedious and everyone ignored him. The reason? Said male friend of the family spent as much of every summer in our very hot, dry country town in a cotton sarong when he was at home. He had a couple of very spectacular sarongs too, and in the evening would add a simple white collarless shirt to come to the table for dinner. He always looked impeccable - and cool.

And ultimately, isn't that what should come down to when we get dressed? Comfort...physically and emotionally?
Posted by Kaz at 01:23 No comments: