Well, that was a big, big day.... Note to self: in future, make rheumatologist appointments on a different day to infusion day. Part of me though, oh, it'll be OK, because it's all in the same building, so I don't need to run around, yada yada, yada... But I did have to hang around much longer than if I were just doing one or the other, and I was hanging around after the infusion...which meant the side effect headache was kicking in by the time I was finally heading home, and I was on the road at the time I'd usually have been falling asleep on the couch.

So I didn't make it to tai chi that night - and I really need to find the You Tube video of the Beijing 12 we're learning so I can review the first two parts and learn the third part which I missed... And do that over and over to fix it into my non-retentive head, before loading up with the fourth section this week!

However, it's been a reasonable aftermath to the infusion this cycle. The headache is largely gone. I still have an exceedingly stuffy head - who else gets really snotty sinuses as a biologic side effect?? But I'm back down to 100mg Tramadol morning and night - last cycle was the first time in months that I'd managed to achieve that, and thankfully, after a few days of it needing to be bumped up, I'm back down again.


One of the things that happened with the rheumatologist this time round was X-Rays of my feet and ankles - which have been particularly vocal for some months now. Apart from anything else, the images give this new rheumatologist a base line to work from. I have two sets of MRI images of my hands, taken around a year apart, but they're from a few years back, and they're my last rheumatologist's baseline images. 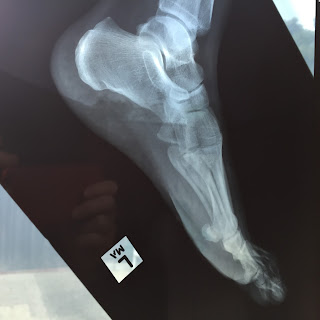 The good news is, there's NO damage in the joints of my feet and ankles. After a bit over three years of biologics - two and a bit on the current one - what that means is that, despite ongoing pain at varying levels, it's actually doing its job - i.e. slowing down the progression of the disease. Those MRI images were of my hands and wrists, and were part of what we needed to confirm diagnosis for the biologic applications, because my blood test results are often quite ambiguous. They showed erosions - holes - in bones in my hands and wrists, caused by inflammation. That happened over the years when the RA was - so I thought - so mild that I wasn't on any DMARDs (Disease Modifying Anti-Rheumatic Drugs). Clearly, although the pain levels weren't bad enough to send me to a doctor for anything more than anti-inflammatories and low level analgesia for flares, there was damage occurring. So, to have the levels of pain I'm having but to discover that my ankles and feet are still damage free is a win. We just need to get the pain management working better!

We're still tinkering with anti-inflammatories. After the last visit, I swapped from the one I was on to a different one. It offers a bit more flexibility for me as it's a fast acting drug, so if I vary the dose, the results of that variation are much more immediate. At the moment, I'm taking one in the mornings. Perhaps if I up that to add a second one in the evenings it'll be enough to get better relief. Upping the pain meds helps, but it also adds significantly to the level of brain fog - and that's definitely becoming more of an issue.

The thing I forgot to mention at the visit - even with a list for the doctor, things get forgotten - is the pain in my right hip. Back in 2013, when the wheels fell off, I was getting a lot of hip pain - on the outsides of my legs. That ended up being tendinitis which, with heat and a lot of targeted physiotherapy, was cleared up. It took a long time, but it did improve a lot. This is pain in my groin - in the joint. So it means a quick trip to my GP and a chat about possibly X-Raying the hip, or some other kind of imaging, because the pain is fairly constant now, and is waking me up at night sometimes. HOW I managed forget to mention it to the rheumatologist is beyond me - note the 'note to self' above... But there's definitely something going that wasn't going on before, so I need to get it checked.

Apart from the hip though, the overall result of this latest review was pretty much to keep doing what I'm doing. Maintain the status quo... Which is good, overall - there's no actual BAD news there. But it's also frustrating.

Perhaps the worst thing about chronic illness is that, even when you're doing 'well', you're NOT well. I'm still sick. And I can't honestly remember the last time I felt well. And that gets very frustrating. While it's reassuring to find that the biologic is doing its job, along with the pile of other drugs I'm taking, the reality is that that doesn't mean I'm getting better. Because I won't. All that will happen is that I'll continue to get sicker...albeit that that process is being significantly slowed by the drugs.

It's a very mixed experience which is very hard to articulate. I AM very grateful for the medications that are helping hold the beast at bay. I am grateful to have found a combination that I can tolerate and that are having a positive effect for me. But it's frustrating that they don't make me feel better.

Biologics are held to be the miracle of RA treatment that have changed the lives of countless RA patients. And they have. Treated early, RA is now a chronic disease that can be managed and if caught early enough, can have a much less severe impact on the lives of the people who have it. And that's the truth for many, many people.

However, for those for whom the meds don't work, or those who - like me - got to the big guns meds too late, that's not the case. I can't work any more - not in a regular job for someone else. My body just isn't reliable enough for me to commit to being somewhere for regular hours every day. I need to build up the freelance work I do so it can earn me a better income - perhaps then I won't feel quite so flat about the whole work thing. There are many forms of exercise I can no longer do. There are activities I can no longer do - and they're not all big things like climbing Machu Pichu... Managing a set of tongs when frying something for dinner is becoming a HUGE issue. And I'm still on the lighter end of the severe scale.

I can still walk, albeit with pain. I can drive, ditto. I can shower and dress myself - there *may* be swearing sometimes...but I can do it. I have friends who can't do these things, or can't do them without help. So again, this isn't so much a complaint as a statement of circumstances, and something that is part of a complex picture for those of us with RA.

There is an enormous spectrum of degrees of pain, disability, effectiveness - or lack of - of the drugs, and so on. And that's a big part of the picture that is so misunderstood by so many people, including doctors.
Posted by Kaz at 23:19 4 comments: