Google, are you paying attention?

I'm playing a little game with Google, at the moment. It's been going on for a while now. I have a Gmail account. On the whole, it works well for me. I can access it anywhere, it's free, it has excellent spam barriers.

Some time back, they changed the inbox format. Now, instead of a single inbox, there's a three part beast, the three sections headed 'Primary', 'Social', and 'Promotions'. I find it a bit clunky, and it's a bit arbitrary. Responses to my blogs can end up in any of the three, and that happens very randomly. How Google makes the distinction between the three categories and which incoming email belongs where is something I can't fathom.

However, the thing that REALLY bugs me is the advent of advertising at the top of the Promotions page. Most, not all, times I open it, and there are one or two unsolicited ad emails tucked in at the top of that inbox. They correlate with interest areas that are clear in the rest of the emails, so it's obviously an algorithm thing... They annoy me. One of the reasons I went with Gmail was to avoid being spammed with mail I didn't want. Then, one day I discovered a feedback option... When I click the dismiss option on the ads, this query pops up, inviting me to tell Google why I got rid of the ad. 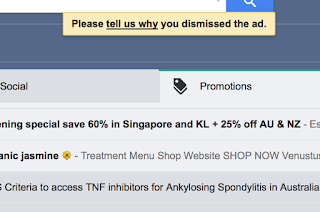 It gives me a menu of options: 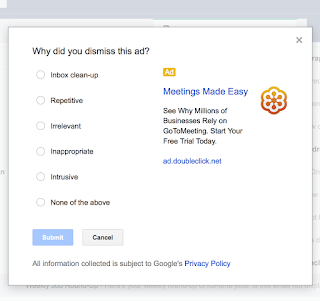 I've been clicking on 'Intrusive' now, for the last four weeks. Very occasionally, I can open that inbox and there's no ad, but on the whole, it hasn't changed anything...the ads are still happening...
So, Google, why the hell do you have a feedback option on one of your platforms if you're not going to pay any attention? I don't want those ads, and I've made that clear in the available space. Yet, they still appear.
First world problem? Yes, of course. But as one individual among the millions of Gmail users, I felt like I had to try and make my point...not that anyone at Google, clearly, is paying any attention. What I'd really like to know is where all the responses are being recorded - I can't be the only person sending feedback - and why they're even bothering!
Posted by Kaz at 23:22 4 comments: