It's that time again. We're moving. Again. A phone call this morning let us know we'd been the successful applicants for a rental house in the capital city of what will be our new state of residence.


I hate moving. I did once add up how many houses I've lived in over the course of my life - it's WELL into double figures - large double figures. In the eight years Dragon Dad and I have been together, this will be my 7th move. That's just ridiculous. But it's also a long term pattern. The longest time I've ever lived in one place was six years - the house my parents bought when I was three and a half. That's a long time ago, and wasn't really a very long time. 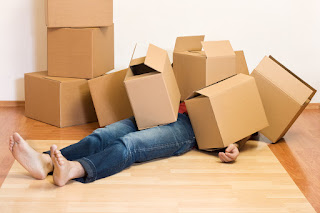 On the one hand, it's a huge relief. This move has been 'pending' for the last eighteen months - if something can actually be pending for that long! It will be a good move for us for a great many reasons - not least being that Dragon Dad will no longer have to commute when the business is busy, as much of the business end of things are located there. I have lots of people on the ground there, while my network here has slowly shrunk since ceasing outside work, and getting sicker. It's WAY cheaper to live there than it is here - the rent on the new place is less than half what we're paying here. It is a smaller house, BUT it's a much nicer house. And we don't need a house the size of the current one. And it's still going to be cheaper than a similar house would be here, given the location. There is a great shul community there, and lots going on, so that will be a big part of our lives again. Big backstory that I'm not going into here, but it's been something missing for us for quite a while here.

However, on the other hand, there will be losses. The two family members with whom I'm closest - No.1 son and a cousin - are here. The Stepson is here. My wonderful rheumatologist is here. He has someone lined up for me in the new city, and he assures me that the new guy and I will get along, as their methods and approach are very similar. My fabulous GP is here. It is SO hard finding a good, old-school GP. My awesome physiotherapist is here. The physio who, after thirty years of a dodgy chronic neck issue and countless physios who've treated it, not only fixed it, but gave me exercises to maintain function AND special ones to do if it starts to seize so that it won't. I've not had to have it treated since... I have seen her for numbers of other issues, but not the neck. We have a wonderful veterinary team here too, so I'll have to find a replacement for them as well.

Finding replacement medical teams is hard. Very hard. They are very important relationships, given I have an active chronic illness. I'll do it, because it must be done. But it will be a challenge, and I do SO loathe doctor shopping. I do have a dentist there - saves me hiding behind my fear of them to put off the necessary work, which you can read about HERE.

And then there are the logistics. ANY move is a challenging event. Interstate moves are so much more challenging. At the very least - on the positive side - there will be removalists doing it, and everything will be moved in one hit. Unlike the way we've done the last few moves, with Dragon Dad hiring a van and doing most of the heavy lifting. We do still have to pack, and once Dragon Dad gets going, he's a cyclone, so inevitably, there have been important things that have taken ages to find at the other end because his packing logic is completely different to mine. Given he's planning to get the cats and me there ahead of the truck loading here, I need to make sure that the list I'm making today of crucial items are in boxes I pack and label so that I can find them with a minimum of angst when the truck arrives and I'm supervising the unloading. Last time we moved I couldn't find the kettle for a few days. Dragon Dad doesn't drink tea or coffee, so no impact for him. It was another story entirely for me!

It'll be a huge adjustment for the cats. They came to this house as kittens. So there'll be new spaces to conquer. A new yard to explore. New crazy sprint routes to map out for their lunatic periods - it's one of those houses that, due to the layout and position of doors, offers a circular loop that will enable high speed laps, as long as the strategic doors are open!

We're offloading a large quantity of furniture. Part of this move is the fresh start - the first house Dragon Dad and I will share that's just the two of us. Coincidentally, the Stepson is moving out (of his mother's place) and into a share apartment with his girlfriend and they have nothing. So they're scoring most of what we don't want. Some of it would have had to go anyway, because we're downsizing, but it's time for a change. Most of it is Dragon Dad's from when HE moved out, and it'll be nice to refurnish with things we choose together. While I'm not a hoarder - he sometimes says I am, but I'm really not - moving constantly since early childhood means I've got emotional attachments to certain items of furniture and various bits and pieces because they mean 'home' to me. So regardless of the actual dwelling, as long as I have those things, it can become home. I have to be quite stubborn about those, because Dragon Dad is the opposite. He is quite capable of dumping an entire house full of furniture and starting over from scratch. Given that most of my remnants of household gods went when I moved in with him, I'm not prepared to give up any more. At least that means we'll have a dining table straight off in the new house, because my vintage baker's table is definitely going with us!

Writing this blog post is partly a means of processing that this much talked about move is now an actual reality and the next few weeks are going to be [awful] hectic. And I'm procrastinating. The Stepson's move starts happening later today when Dragon Dad goes to pick up the rented van, and I have a bedside table to empty out. No great loss, that one - part of a collection of timber chests of drawers with baskets for drawers - ruinous for stockings and anything delicate and I've always loathed them!

ONE useful thing that did occur to me this morning that could count as a benefit... the census next week requires our address to be included, and that's to be kept for four years, instead of the previous 18 months. Well, it'll be accurate for roughly two and a half weeks, and then we won't be living here, so what they have for the next four years for our location won't be valid. That kind of tickles too!

So, now I need to bite the bullet. Pause briefly to eat some lunch, make my lists properly, and get on with it.
Posted by Kaz at 20:08 11 comments: