Rheumatoid Arthritis - when everyone else knows better...

Canadian blogger, Lene Andersen posted a link to one of her #RABlogWeek posts on Facebook this morning - the first of the daily topics, Starting Stories (read Lene's post and others from the many people who took part in the event HERE) - with the suggestion that people continue the conversation with what they could contribute about starting over with chronic illness. She and I had both written about something other than our original diagnoses in our posts for the event, as both of us had dealt those elsewhere at other times - you can read mine HERE, and Lene's HERE. In mine, I'd written about the huge upheaval my RA caused in my life when, after 20 years of mild disease, it suddenly became aggressive, requiring much more intense treatment very quickly to regain control of the disease. Lene wrote about the mental and emotional shifts she consciously made after starting biologic drugs, which, she says, gave her back her life.

It's those mental and emotional shifts and growths that are so very necessary when there are big changes that happen in our lives. Living with a chronic illness means there can be a permanent level of uncertainty and worry about the future, as well as the challenges of everyday life. That in itself can be quite tiring, on top of the pain and and general sense of not being well, and the fatigue that is just part of a disease like rheumatoid arthritis (RA). Then there can also be depression, frustration and loneliness to deal with as well. It's a lot for anyone to have on their plate, and can all get quite overwhelming at times. So, how to deal with all that?

For myself, it's come down to one basic thing that overrides all others: learning to stop catering so much to other people. As a young girl and adult woman, my conditioning has been very much about care taking other people, making sure they're OK, and putting them ahead of myself in order to achieve that. Now, there are times when that is entirely valid - attending to a small child, or a sick person, for instance - but those examples usually have an end date to them. The general expectation that women will always put others ahead of them, however, doesn't always feel like it will come to an end. Couple that sense of what can be unrealistic expectations from others when someone is chronically ill, and it can take on an entirely different aspect.

Illness can make many people uncomfortable - being around it, that is. It can prompt - for the sick person - a lot of unwelcome suggestions and the other person goes into fixit mode, because if the illness can be fixed, it'll go away, and everything will be 'normal' again, right? For those who are around the sick person regularly - family and close friends - that can be incredibly frustrating. They WANT us to be well again, for our own sake, as well as their own. The trouble with that, is that RA is incurable. The treatments that currently exist are aimed at slowing down the rate of the disease, and hopefully preventing damage and disability. They're not uniformly successful. Everyone's RA is different, as are responses to the drugs. The information that's out in the public domain varies too, depending on the source, and there are far too many people peddling new-age 'cures' that have nothing to do with good science or medical practice and altogether too much to do with making money from vulnerable people.

Consider this exchange I had on Facebook chat yesterday morning while in the middle of receiving my current biologic drug via infusion (edited to focus on the pertinent parts of the exchange):


"How are you? I hope you are flare free, unless you are wearing flares."

"LOL! Just having the infusion of my biologic drug."

"Yep. Once a month. Whole class of drugs that were created over the last 15 years or so to treat autoimmune diseases. It targets the T-cells and interferes with the autoimmune activity - which is in constant overdrive. Slows the progression of the disease."

"Hope the drugs are working and not doing you harm."

"Minimal side effects; and working reasonably well. More harm to be had by letting the disease run rampant with no checks..."

"Long term effects. Of the drugs."

"Long term effect of the drugs is controlled disease. If unchecked, it can damage major organs as well as joints. Without them I risk permanent damage and disability."

On the surface, the conversation sounds as if he's just concerned for my wellbeing. The wider context is that he's given to posting stuff by David Avocado Wolf, a well known figure on Facebook, who frequently posts memes and articles supporting what I call woo (unsubstantiated, non medical treatments and supplements that purport to cure people of any number of diseases) as well as anti-vaccination material, and conspiracy theories about 'Big Pharma'. We've had conversations prior to this one about the drugs I take, and my sense is that he largely disagrees with the choices I've made medically. Having said that, he's not knowledgeable about either the disease or the medications used to treat it.

There was a time I'd have edged my way out of the exchange, not taken him on, and opted to not put anything forward that was remotely contentious. And I'd have gone away cranky and upset with myself for not standing up for myself. Those days are over. It's MY life, MY disease, MY choice, MY treatment, and MY business. I don't have to mollify others, or justify my choices. I don't have to do it to make them more comfortable, or put myself in a 'better' light with them. There's no requirement of me that I build them up by ascribing to something they say that I don't agree with, just to make them feel good. This friend is not in a great space at present, having recently lost his father. I was aware of that, and in the bits of the conversation that I didn't include here, I checked in on how he was travelling. Being aware of his fragile state, I was careful - for my own sake as much as his - to be polite, but I wasn't going to back down either. I feel that his last comment - which was the end of the exchange - is telling. There's no real acceptance of what I was saying about the drugs in question. That's a back off...

As for many people, these drugs have changed my life. Even the treatment methods with DMARDs (Disease Modifying Anti-Rheumatic Drugs) have changed since I was first diagnosed. Back then, they were administered one at a time. If one wasn't effective, it was stopped and a different one started. Now, if one isn't particularly effective, it is maintained and another one ADDED. It's been found they work better in combination. That was the case for me - I take two DMARDs, one of which I'd taken twenty-odd years ago to no avail. In combination with the second one, it gave me, on a good day, a 50% improvement on where I'd landed when the disease went berserk. That wasn't enough though, and required a high dose of oral prednisone and periodic booster infusions of prednisone to give me more mobility and less pain - a situation that couldn't be maintained long term. Adding the biologic drugs has made all the difference. I'm still not 100%. I may never be. But I'm so much better.

The thing is, even during the mild period of my illness, when I didn't need such hard core medication to function relatively normal, the disease was progressing. The MRIs of my hands ordered by my rheumatologist showed synovitis (inflammation of the synovial membranes in my finger joints) and erosion of bones in my hands - the latter being permanent damage. Bone eroded away by disease activity. That happened during that largely unmedicated twenty years. I hate to thing how much faster it could happen if I were unmedicated now that the disease is much more aggressive. The image below (not the image from my MRI) shows an example of the damage that can happen with RA. 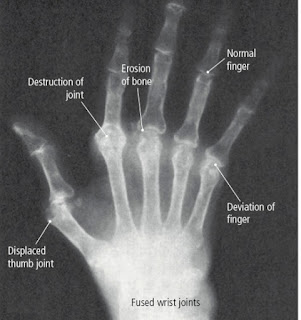 For me to move forward and find a way to live with this disease and all its daily challenges, I need to focus on myself in a quite new way. I need to be able to feel confident in the treatment choices I make in conjunction with my medical team. I need to know that I'm making the best possible choices based on the best information that can be sourced. And I need, most of all, to have those choices respected. I wasn't disrespectful of my friend's point of view. He's perfectly entitled to hold it. However, that has to be reciprocal. I'm not going to cater to people who, with the best of intentions, project their ideas and feelings about treatments on me, when they really don't know what they're talking about. Instead, they will hear from me exactly why I make the choices I do, and what the consequences would be otherwise - respectfully.
Posted by Kaz at 21:00 No comments: